Is medical marijuana legalization inevitable in Ohio? It is starting to look that way.

Opponents are in the minority, and are fighting a two-front war against a growing ballot initiative,and direct action by the state legislature.

Rep. Bob Hagan (D) has introduced legislation that would allow patients to grow their own medicine or designate a caregiver to grow their marijuana for them. Similar laws exist in 21 other states, and more are joining them.

If the lawmakers don’t do it, the people may, as advocacy groups are gearing up for petition drives that would put a medical marijuana initiative on the November ballot. The Ohio Cannabis Rights Amendment would allow approved patients to grow marijuana and give farmers the right to produce hemp. 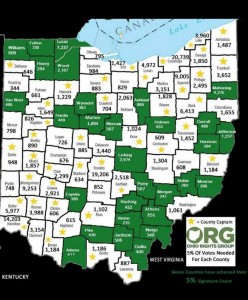 The Ohio Rights Group just announced that they’ve got enough signatures collected in 30 of Ohio’s 44 counties to get on the ballot this November.

Some are critical of the Amendment, saying the wording is vague. As written, it would allow those diagnosed with AIDS, cancer, Alzheimer’s, and epilepsy access, but also those with severe pain, depression, muscle spasms, and “any additional medical condition”.

“Everybody has a diagnosis of something,” said Marci Deidel of Ohio Drug Free Action Alliance. “When I read that ballot language to me it’s basically full legalization.”

In order to get the Amendment on the ballot, we will need more than 385,000 signatures by July 2. It will take a serious effort from advocacy groups, who plan on aggressively targeting voters as they come out of next month’s primary election booths.

What happens when you hold a debate on the legalization of marijuana and the person opposed doesn’t show up? That sort of what the Dayton City Paper was wondering when they took out two pages of a recent issue to dedicate to the cannabis debate and they couldn’t find someone to write in opposition.

A photo of the newspaper, one side filled with debate in favor of marijuana legalization and the other mostly empty with a small note from the editor, has gone viral and is a great example of what marijuana advocates think of opposition arguments. 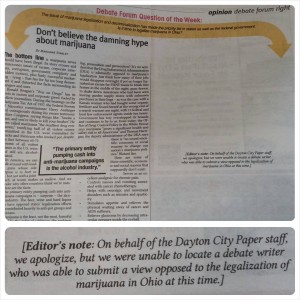 “On behalf of the Dayton City Paper staff, we apologize, but we were unable to locate a debate writer who was able to submit a view opposed to legalization of marijuana in Ohio at this time,” reads the editor’s note.

But there are people opposed—both to recreational marijuana and medical marijuana, the latter of which stands a chance of getting passed this year.

“We are in this to win it,” said Mary Jane Borden of Ohio Rights Group.  “We will do what it takes to win and we’ll choose our path depending on our best winning strategy.”

For now, however, marijuana possession remains against the law in Ohio no matter your diagnosis or situation.